SCoRF, the Scholarly Contributions Report Form, is a metadata entry tool, in the form of an Excel spreadsheet familiar to all researchers, that makes easy the tasks of entering details describing the contributions of scholars to research investigations and of authors to the scholarly journal articles that result from them, and of describing their roles as researchers and authors.

SCoRF uses controlled vocabulary terms defined in SCoRO, the Scholarly Contributions and Roles Ontology, which, as explained in the previous blog post, imports and expands PRO, the Publishing Roles Ontology.

In SCoRF, these terms are structured into drop-down lists attached to the spreadsheet cells, from which the user selects appropriate options, permitting rapid metadata entry in a way that all but eliminating the need for typing. No new or unfamiliar technology is required either by authors or publishers. The exercise of ascribing contributions and roles to the people involved in an average journal article using SCoRF should take no more that 15 minutes (excluding thinking time!), and the resulting report is suitable for submission to a publisher together with the manuscript to which the report relates.

The inclusion of ontology terms within an Excel spreadsheet has been made possible by the use of RightField, described in [1], an application developed by Stuart Owen and colleagues at the University of Manchester as part of the SysMO-DB Project. A RightField-enabled Excel spreadsheet such as SCoRF contains ‘hidden’ sheets with information concerning the origins and versions of ontologies used in the annotation, that can be viewed using the RightField Inspector, and from which RDF-encoded metadata can be extracted. For the scholar, the main advantages of using RightField are that it enables users to create consistent annotations without having to change their working practice or understand the underlying SCoRO ontology – everything is embedded in the Excel spreadsheet.

Roles are recorded separately from contributions, within the categories authorship roles, data roles, investigation roles and project roles. The items in the drop-down lists associated with the ‘role’ cells of the spreadsheet represent individuals within the classes scoro:AuthorshipRole, scoro:DataRole, scoro:InvestigationRole and scoro:ProjectRole, for example scoro:corresponding-author, scoro:data-curator, scoro:research-assistant and scoro:project-manager, respectively.

As an example, the following table lists the possible values for authorship roles and authorship contributions specified within SCoRO.

Similar lists of SCoRO controlled vocabulary terms for all the other types of role and contribution are given in the SCoRF Help worksheet that accompanies the Report worksheet. If the contribution choices provided by SCoRO are inappropriate, additional contributions can be specified under ‘Other’ and entered manually.

The following figure shows the region of the blank SCoRF Report worksheet concerned with roles, displaying the drop-down list of controlled vocabulary terms from SCoRO from which the user can select his or her authorship role for the article under consideration. In recognition that people may have more than one role, up to four authorship roles, two data roles, two investigation roles and two project roles may be specified in the SCoRF spreadsheet for any one person.

Legend: The Roles section of the SCoRF Report worksheet, with a drop-down list of authorship roles taken from SCoRO, the Scholarly Contributions and Roles Ontology.

The second diagram shows that region of the SCoRF Report worksheet concerned with recording a person’s contributions to various tasks, the effort involved in making each contribution being selectable from a drop-down list.

Legend: The first part of the Contributions section of the SCoRF Report worksheet. The drop-down list for the selected cell enables this contributor’s effort expended on the task of writing the manuscript draft to be specified.

As an example of how the SCoRF Report worksheet might be used in practice, the following figure shows the roles and contributions for myself and for Katie Portwin, the first two authors in our “Adventures in Semantic Publishing” paper [2]. 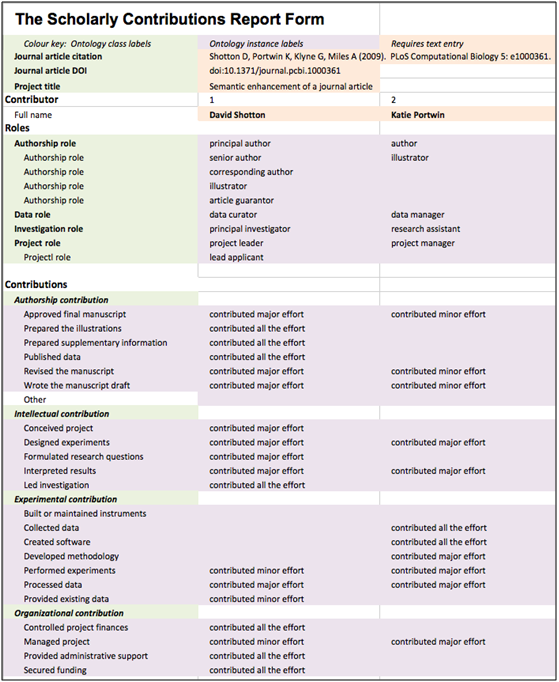 Legend: The region of a completed SCoRF Report worksheet showing the first two authors of Reference [2], providing information both about the research project and the journal article reporting its results. Text entries shown with a green background are ontology class labels drawn directly from SCoRO and used to pre-populate the SCoRF spreadsheet. Text entries with a purple background are ontology instance labels drawn directly from SCoRO, those in the second and third columns (providing information for contributors 1 and 2) having been selected from drop-down lists. Note that the only information that had to be manually entered into the form (by typing or by pasting from another source) is contained in the few cells having an orange background. (To simplify and compact the spreadsheet for display in this figure, unnecessary columns and unused rows have been removed.)

Completing the SCoRF report form for all four authors of that paper took me about ten minutes, demonstrating that with this tool the creation of rich metadata about scholarly roles and contributions is not an arduous task. The completed exemplar form for our “Adventures in Semantic Publishing” paper, of which this figure shows a selected region, is available at http://purl.org/spar/scoro/Exemplar_Report_Form.xls.

The SCoRF spreadsheet, published under a CC-By attribution license, is generic and easy to modify, and thus could be customized by a publisher for incorporation into a journal’s manuscript submission system. I commend its use to the academic community and to scholarly publishers.